Questions and discussions about your electricity and gas meters, connections, disconnections and more

Are meter readers getting slacker? 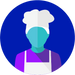 Why do readers just drop a card in the letter box instead of ringing the bell, just because they see a gate? Is it so much trouble?

At least you are lucky they drop in a card to say they had been around. The last one we had gave my wife a mouthful of verbal, just because she asked who he was and what was he doing.

She had never been home when they have come around before and was wondering who the stranger was making his way around the side of our house. When she asked him he got abusive.