A detailed case study for the use of controlled load electricity to heat water shows significant cost benefits.  The study is based on data from December 2013 onwards.  Controlled load is also known as ancillary, off-peak or J-tariff.

Table 2 below shows the time in years to pay off systems varying from $3,000 to $7,000, and for varying rates of daily hot water usage.  All calculations include GST and are adjusted to current AGL tariffs without any plan discounts.  I have not used discounted tariffs because they are plan dependent and have changed over time.  We are currently on a plan without discounts because that is the best plan for us.

The emphasis these days appears very much to be on photovoltaic (PV) household solar energy generation and storage, and the associated costs and benefits.  Solar hot water storage is also a form of household solar energy generation and storage, and one which can have definite cost benefits, particularly for those using controlled load electricity to heat their water.  The benefits will also certainly increase in proportion to the number of members in a household and the quantity of hot water being used.

One advantage of using electricity to heat water instead of gas is that you pay only one daily supply charge, given that everyone is already paying a daily supply charge for electricity.  Current gas supply charges on available plans in SA will add between 0.82500 and 1.00350 per year to energy costs, depending upon the provider and the plan chosen.

Solar PV systems are not generally used to heat hot water because the energy demand is too great a drain on batteries in particular, and also possibly on inverters.  Special relays and timing devices can be used to direct energy from the panels to heat water, but they interrupt the normal processes and are only beneficial under specific conditions.

The two main types of rooftop collectors are flat panel and evacuated tube.  There are many articles on the web, such as Flat panel vs evacuated tube.  Flat panels are cheaper but significantly less efficient at capturing solar radiation.  Evacuated tubes are more efficient at capturing energy when the sun angle is low because the sides of the tubes are usually in the sun, whereas a flat panel reflects a great deal of radiation from the glass cover at low sun angles.  Also, evacuated tubes are completely cold to the touch on the outside, showing that the vacuum retains virtually all the radiation captured inside the tube.  Flat panels heat the water to within the range of 55-60 degrees centigrade, whereas evacuated tubes can easily heat the water to above 90 degrees.  This means that on a day with limited solar radiation, an evacuated tube system will provide more heating than a flat panel system.

It is of interest to note that a solar heated hot water tank is a very substantial solar energy storage system, just like a solar battery.  To raise the temperature of 310 litres of water from 20 degrees centigrade to 66 degrees centigrade requires 16.6 kWh of energy, not including losses.  The losses are quite significant, particularly when the temperature differential between the tank contents and the ambient temperature is higher in winter.  A reasonable estimate would be 20%, which means that to electrically heat 310 litres to 66 degrees from an ambient temperature of 20 degrees would require about 20 kWh.

In November 2013 we had an Endless Solar evacuated tube solar hot water system installed for $5,520 including GST and a Small-scale Technology Certificates (STC) rebate of $750.  The system consisted of 20 tubes on the roof and an Everlast 310 litre stainless steel tank (with a 15 year warranty) connected to the controlled load circuit.  It includes a controller which monitors the temperature in the header tank at the top of the evacuated tubes, at the cold water inlet to the tank, and at a point halfway up the tank.  When the temperature difference between the header tank and the bottom of the tank exceeds 8 centigrade degrees a small pump starts up and transfers the hot water from the roof to the tank until the temperature differential drops below 3 degrees.

USING THE METER BOOST BUTTON TO COMPLEMENT THE SYSTEM

We chose the slightly more expensive controller with the third temperature monitor because it enables us to check the status of the tank at the end of any day where there might not have been enough sun.  If the temperature indicates there is not enough hot water for evening and morning showers, then we can switch the hot water circuit breaker back on (if it’s currently off), and press the boost button on the smart meter to give up to 2 hours extra heating.  This can be repeated as many times as required.  The controlled load circuit from the grid is completely separate from the peak circuit and will always register at controlled load tariff rates, no matter what time of day you operate the boost button.  If the tank doesn’t need a full two hours of heating, boost can be switched off by pressing the boost and display buttons simultaneously, or switch the circuit breaker off so it doesn’t run again that night.

Table 1 is an extract from our complete and detailed billing records over the period studied, and the discounts and tariffs are based on the exact dollar amounts paid each month.  These numbers are based on two retired adults living at home, but I am not able to give any reliable estimate of our average daily hot water usage for this analysis.  The estimated meter readings in this table do not detract from the overall costs because eventually the meter was read, and now we are on calendar monthly accounting with automated and accurate smart meter readings.

The currently quoted prices for supplying and installing a solar hot water system appear to range from $3,000 to $7,000.

Table 2 below indicates the estimated number of years for recovering the costs of a solar hot water system based on various daily hot water usage levels and installation costs, and using the actual average cost per year that we have incurred since 2013.  All costs include GST and exclude any plan discounts and state government pensioner concessions. 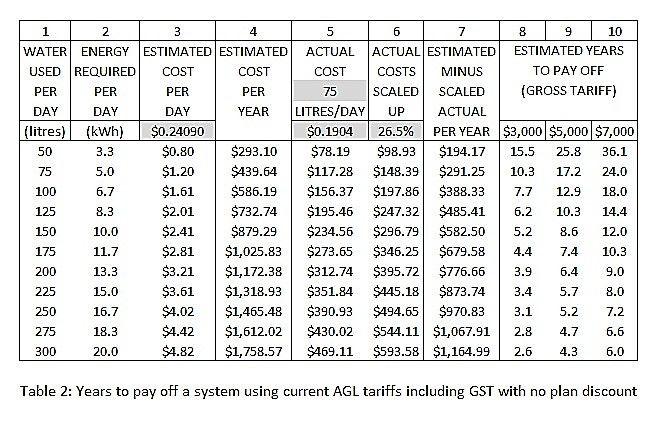 Table 2 is based on using the current AGL full retail controlled load tariff of $0.24090 per kWh including GST to estimate current costs for various assumed daily levels of hot water usage.

Column 2 is the energy required to heat the amount of water shown in Column 1 from 20°C to 66°C, and Column 3 is the cost of that energy at the current tariff.

Column 4 is therefore the annual costs simply based on the physics of what it would cost to electrically heat the various daily water usage amounts shown in column 1 and using the tariffs as indicated at the top of the column 3.

Column 5 is based on what we actually paid annually, using the assumption that we used 75 litres of hot water per day on average.  In other words, the cost of $148.39 next to 75 litres per day is what we actually paid, and the other amounts are relative to that cost.  For example, if you think you would use 150 litres per day, the cost estimate will be $296.79, which is twice what we paid.

The average annual amounts actually paid were based on average historical tariffs of $0.1904 full retail, as can be seen from Table 1.  The current AGL gross tariff of $0.24090 is an increase of 26.5% over what we paid on average.

Column 6 uses our actual costs scaled up by these percentage tariff changes to better estimate what we would have paid had we been using current prices and the various amounts of hot water.

It is impossible for me to estimate exactly how much hot water we actually used on a daily basis over the period studied, and this will have a bearing on the accuracy of the actual costs per year used below. However, we generally use very little controlled load from about September through to March, so the estimate is not likely to be hugely in error, and the costs are all actual costs.  I think 75 litres per day is probably a fairly reasonable and conservative estimate.

It is very obvious that those with large families stand to benefit the most, and there are potentially large savings to be made once the system costs have been paid off.

Please see my Profile if you’d like to learn more about other articles I have written on solar energy and my  participation in AGL’s Virtual Power Plant solar battery storage program.