buch11
Switched-on
Dear Team,
I have been an AGL customer since December 2018.
Recently, I have been facing an issue with the gas bill for the period of  29 Apr - 28 May 2019. I have been calling to AGL customer care and explaining them the issue again and again without getting a correct bill. After a few emails AGL has not been able to explain the reason for overcharging my account! Hence, I am putting the issue here in writing hoping to get it resolved this time.
Issue with the Bill no. 1 (29 Apr - 28 May 2019)
We received a bill (Bill 1) for the above mentioned period on June 13, 2019 for the amount of $ 90.61. We sent a mail to the AGL team as the meter reading in the bill was incorrect and asked to send the revised bill.
Issue with the Bill no. 2 (29 Apr - 28 May 2019)
As an answer of the mail sent we received a revised bill on June 19,2019 for the same period. The meter reading was correct but the it had an amount of $123.92 as the balance brought forward (this was not mentioned in the bill generated on June 13, 2019.)
Below is the image of my account statement. I have highlighted 2 entries dated June 18,2019 for the period of 29 Mar - 28 Apr 2019 (The period for which the gas bill has been raised and already paid). I believe that AGL can not charge me for a period the bill of which has already bill paid and reversal of the amount paid ($ 54.87). 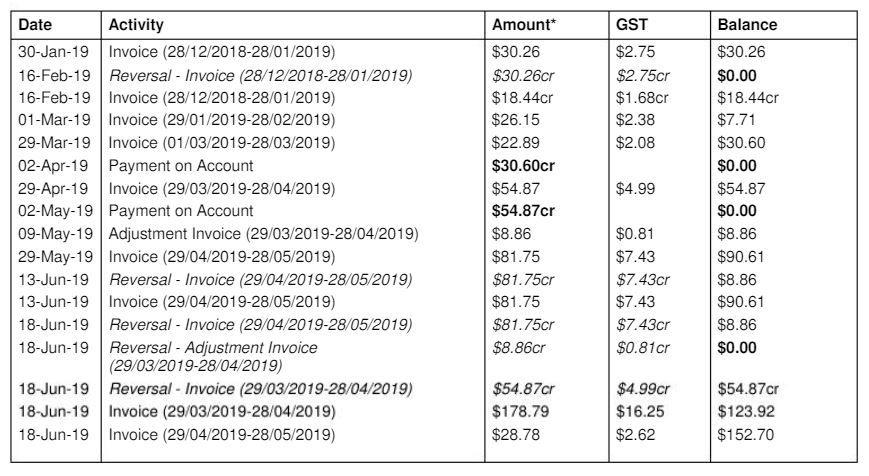 We were told by a customer helper that AGL had started investigating this matter (Attaching the relevant mail) and we received a bill (3rd one!!) with the same balance brought forward.
This is the second time I have an issue with the AGL gas bill in the six months that I have been with them. I hope you understand that it is very frustrating to spend so much of my time and energy for a bill every time.
To add to this, I have accumulated all the meter reads from all the bill pdfs that I have received. All the numbers in there cant explain why and how AGL could have undercharged me for any period of time - take a look at below image :

Average gas bill for 28 day period of my unit has been around $30 or so there is no way AGL would have undercharged me for more than $100 for the period of two months( balance brought forward)!!

Even after requesting to put the bill on hold via email, I have received the reminder for unpaid bill. This is
becoming very time consuming and if not resolved I would happily terminate by both Gas and Electricity accounts with AGL. In case the issue remains unresolved further, we may escalate it to ACCC.
One more feedback - every time we have chat with online chat person, we are always asked to provide latest meter reads and we get told that we will receive a fresh bill within 24 hours - we have this conversation at least thrice on top of what chats/phone calls/emails mentioned above!
Tags (5)
Reply
0
2 REPLIES 2

Welcome to the AGL Community!

This sounds very frustrating. We'd like to see what we can do to help here, but in order to do so I'll need to ask you to send me a very quick private message with your AGL account number and email address first.

If I’ve helped in anyway, please mark my post as SOLVED!

This helps our Community know the answer to common questions.
Reply
0

On Wednesday, we got an updated bill which was incorrect again with an absolutely different issue! initially there was issue with my cooking gas meter. AGL fixed that and overcharged my hot water gas readings which were correct from the beginning and there was no need to update the same!

On Friday, we had a word with escalations team again and now we are waiting for "ANOTHER" updated bill. Hopefully this time AGL gets the numbers right.

It's unfortunate that the time and efforts we have spent getting this fixed is maybe more than the the worth of my usual monthly bill.