An Engineer's Case Study: Panels Are A Must, But Forget The Battery

I am a retired electrical engineer and have compiled a spreadsheet based on 6.36 years of solar power generation in the Adelaide area.  We have 5.2 kW of panels on the roof, consisting of 20 REC 260 PE panels facing north at an angle of 27.5° above the horizontal, and with no shading.

Thus the annual savings resulting from adding the battery was therefore the difference, $344.73.

If you are intending to install a solar system with a battery, make sure to take into account the purchase price and installation costs of the battery itself to see if it is worth installing.

The table below shows how long it would take to pay off a battery based on various battery costs and annual savings of $344.73.  You may also need to replace the battery after 10 years or so.

The annual savings of $2,063.96 from the addition of solar panels only is detailed in The Significant Cost Benefits of Solar Panels, Table 8.

The annual cost of having neither panels nor battery has been derived from the data below from 1st January 2019 onwards, as has the annual savings for having both panels and a battery. 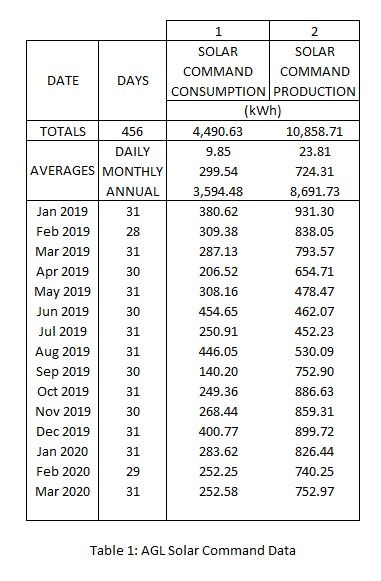 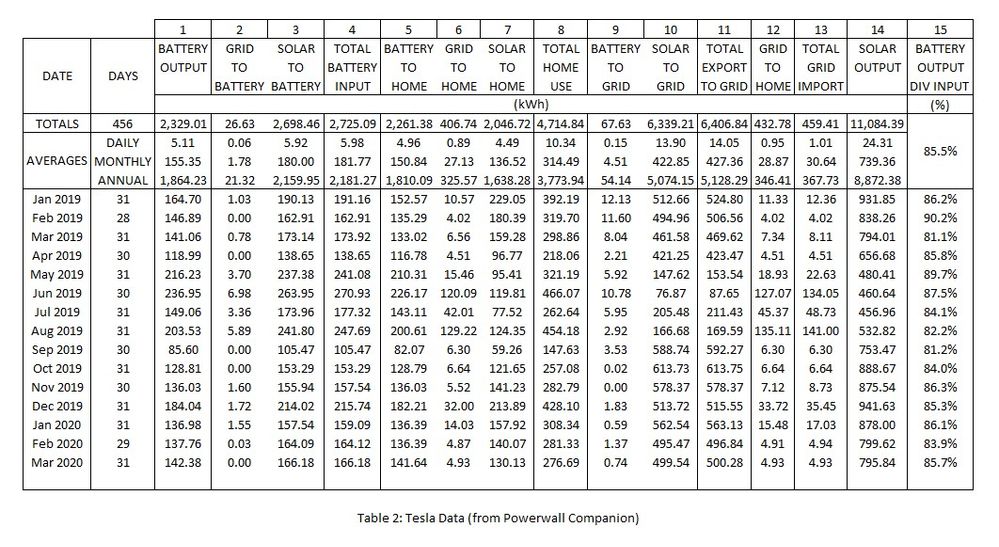 Table 2 data was obtained by downloading the weekly data from the Windows app, Powerwall Companion.

Column 15, battery output divided by battery input, is the efficiency of the battery storage process.  The losses associated with this process would, without a battery, be otherwise available for in-house use or for sale as feed-in. 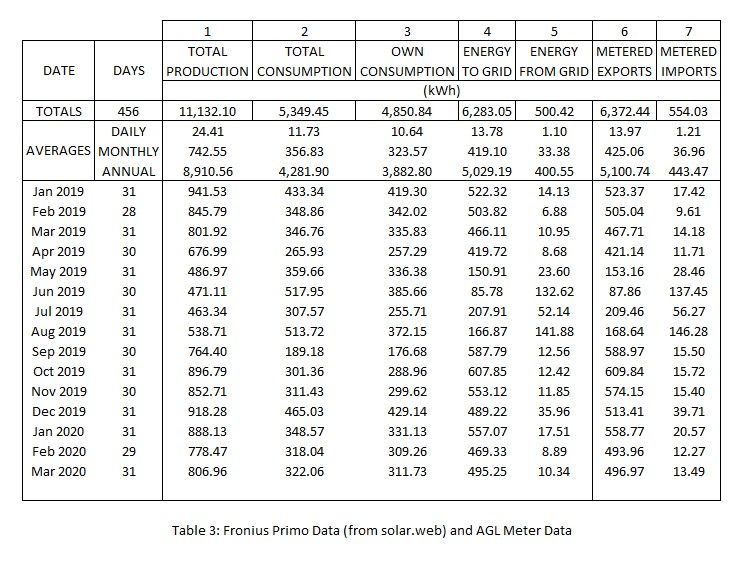 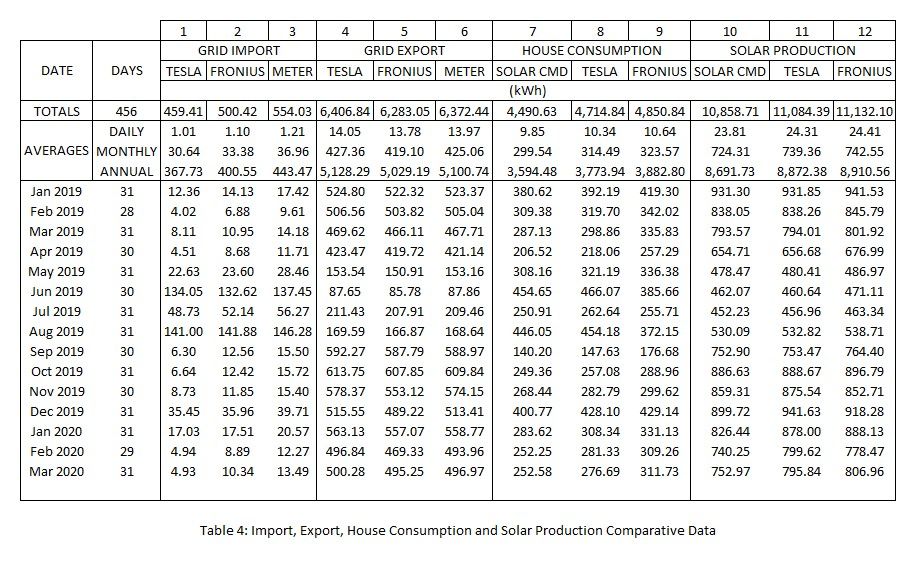 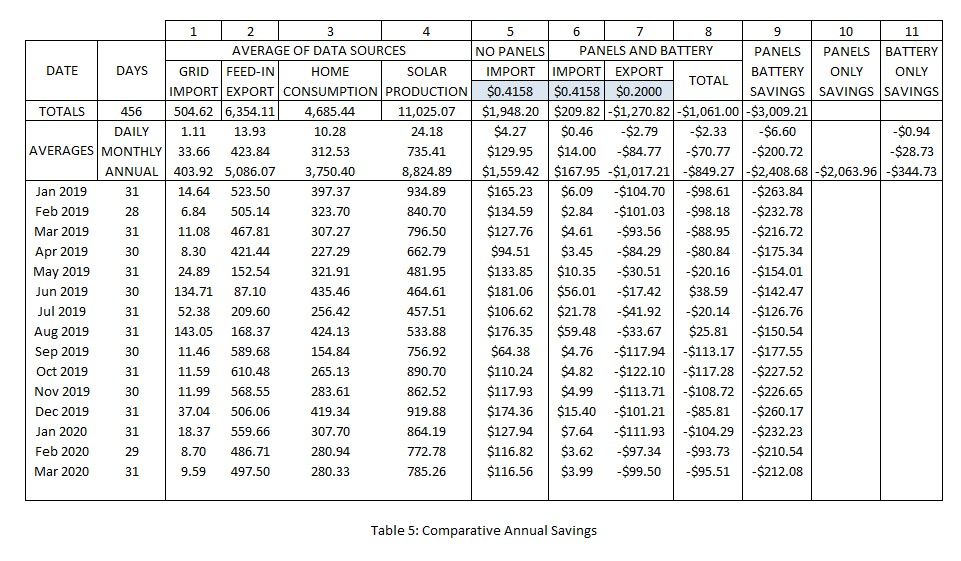 In Table 5, the monthly data in Columns 1 to 4 were derived from the averages of the three respective columns for each variable in Table 4.

Column 5 was derived by multiplying the current tariff by the home consumption data, given that, without solar panels, we would have to import all of the data used in-home.

Column 6 was derived by multiplying the current peak import tariff by the grid import data in Column 1.

Column 7 was derived by multiplying the current feed-in tariff by the grid export data in Column 2.

Column 8 is the sum total of the imports and exports for solar panels and a battery.

Columns 9, 10 and 11 summarise the savings.  The tariffs used to derive the cost totals in Columns 6 and 7 are the current tariffs for our AGL Solar Savers plan, highlighted in Row 4 of Table 5 above.

Given that 6.6 kW panels and an inverter can be purchased and installed for under $4,000, there is absolutely no reason not to do so in my opinion.  It is quite likely to be paid off in under 2 years, as the data above shows.

Solar batteries, based on our installation, would require a lot longer to pay off, and do not appear to be worth while at this stage.  Remember that the process of charging and discharging a battery involves losses of at least 15%, so by not having a battery, you have at least 15% more energy to use in-house or sell as feed-in.  You may also have to replace the battery in 10 years or so.

It is also surprising at just how quickly a battery discharges when powering the house at night, or during a blackout.  If you are intending to install a battery, I suggest you aim for the largest capacity you can, commensurate with having sufficient solar panels to keep such a battery fully charged.

Does this mean you can only put a maximum of 5kw into the grid?

So you have 10KW of solar panels and a single 5KW inverter?

Why are you wasting this opportunity?

in SA, SA Power Networks limits feed-in to 5 kW, but allows up to 10 kW of inverter capacity.

You are also allowed to have 1.33  more panel kWs than the rated capacity of the inverter.  That is how you can have 6.66 kW and a 5 kW inverter.

I am installing another 5 kW next Tuesday, along with another Fronius 4 kW inverter, to go with my existing 5 kW Fronius inverter.  The panels are facing east and west, so their output will be 16% to 18% below their rated power.  So, even though I'm installing a total of 5.28 kW of extra panels, it is better to use a 4 kW inverter running nearer to its capacity, and therefore more eficiently.

Have a look at some of my other postings, and you can see a detailed analysis of the cost/benefit of panels and batteries.  In particular, check out The Significant Cost Benefits of Solar Panels and An Engineer's Case Study: Panels Are A Must, But Forget The Battery

I also have a spreadsheet of 30+ SA electricity plans and 19 SA gas plans.

If you live in SA and would like me to tell you accurately and definitively which are the best plans for you, I can do so if you send me your bills.

One year's worth will give a very good result, although it can be done from one bill, but two years would be slightly better as it would average over repeated seasons.

My email address is rich.m.ball@gmail.com for easier communication.