A Case Study Of Solar Panel Economics: 5 kW vs 10 kW

I am a retired electrical engineer, living in Adelaide, and involved in the AGL VPP.  On 01/11/18 our Sunverge system was replaced by a Fronius Primo 5.0 kW inverter and a Tesla 13.5 kWh Powerwall 2 battery.  We have 5.2 kW of panels on the roof, consisting of 20 REC 260 PE panels facing north at an angle of 27.5° above the horizontal, and with no shading.

I refer you to The Significant Cost Benefits of Solar Panels for further reading, and for those considering a solar battery, An Engineer's Case Study: Panels Are A Must, But Forget The Battery.

I have considered adding more solar production capability using our vacant east and west facing roofs.  In order to better understand the cost-benefits of this, I have analysed 1.42 years of data from 1 November 2018 until 31 March 2020.

In order to understand how much extra feed-in revenue would result from increased production, I have analysed 30 minute interval AGL Solar Command solar production data, and scaled it up, allowing for a maximum allowable SA Power Networks feed-in of 5 kW, using 1 kW increments in rooftop solar panels from 5 kW to 13 kW.

In order to understand how much our grid imports would be reduced as a result of increased production, I have analysed daily data to identify all those days when consumption exceeded production, and we would have imported grid energy.  Increased solar production will mean less energy imported on those days, and possibly fewer days on which imports are required.

Table 1 above shows how the feed-in revenue increases as the panel power increases.  The revenue numbers in Row 3 are based on the estimated solar production in Row 2, and our current AGL feed-in tariff of $0.2000 per kWh.

Row 4 is the average solar energy produced (kWh) for each of the half hourly intervals between 1 November 2018 and 31 March 2020.  This data is revenue grade data from AGL’s Solar Command.

Row 5 is the maximum solar energy produced (kWh) for each of the half hourly intervals between 1 November 2018 and 31 March 2020.  This shows that all feed-in energy has been limited to 5 kW.

I have extended the solar panel power out to 13 kW just to give an idea of the trend, rather than as a desirable goal.

Table 2 above shows how the peak grid imports decreases as the panel power increases.  The cost numbers in Row 3 are based on the estimated imported energy in Row 2, and our current AGL peak (general usage) tariff of $0.4158 per kWh.

Row 4 shows the number of days between  1 November 2018 and 31 March 2020 for which household consumption exceeded solar production, and we had to import grid energy.  This number shows a decline with increasing solar panels, as more solar energy means there are fewer days in which consumption exceeds production.

Table 3 above shows the combined savings for 6 kW to 13 kW of panels, relative to having 5.2 kW.

The revenue numbers in Row 2 are derived from Table 1, Row 3, and are the difference between the revenues for each panel size minus $1,174.

The cost numbers in Row 3 are derived from Table 2, Row 3, and are the difference between the cost for each panel size minus $125.

Row 4 is the sum total of revenue increases and reduced grid costs. 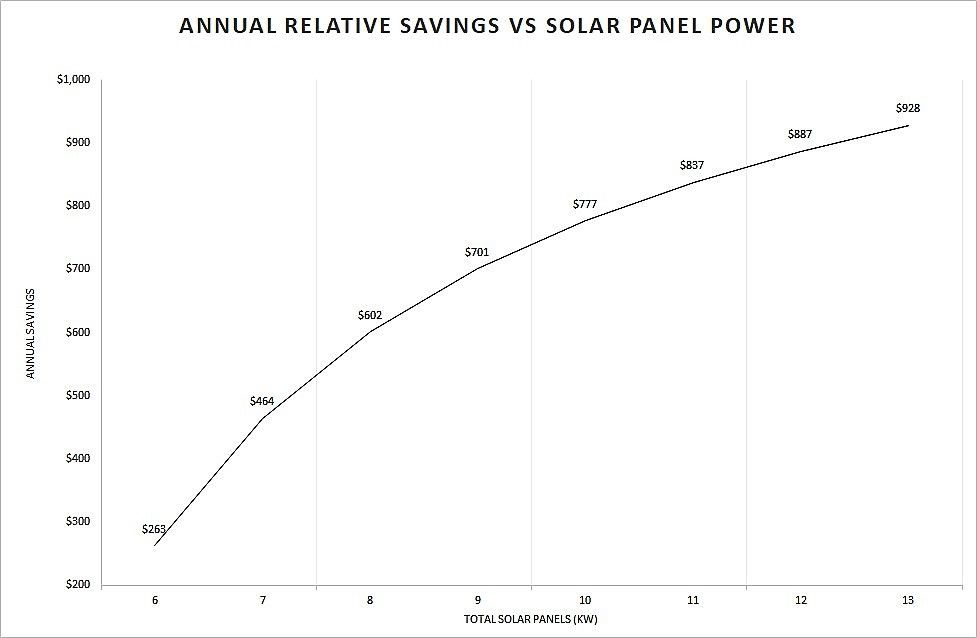 On the basis of the savings shown in Table 3, I have decided to install 8 x 330-watt panels on the eastern roof, and the same on the western roof, with a Fronius Primo 4 kW inverter.  The installation cost of $6,000 should result in a payback time of less than 10 years, and given my desire to be a part of the solution, and not the problem, I consider that worthwhile.

The rated output of 16 x 330-watt panels is 5.28 kW, but given the east-west orientation, that will be reduced by about 16% to 18%, to 4.38 kW at best.  For further details on orientation, see Monthly, Seasonal And Annual Solar Production Data For Adelaide.

The western roof is also subject to shading, so I will be installing 6 TIGO optimisers on that side.  The use of a second Fronius Primo inverter enables proportional feed-in from both inverters, and for the Fronius Smart Meter to facilitate 5 kW feed-in limiting from both inverters.