@CEE_Consultant Many thanks for taking the time to put together this information. Much appreciated!

This helps others in the community find the answers they're looking for.
0

I read and watched your videos and found I have some trouble in how you present them. The graphs do not match what I know and understand about the tidal flow and how your "cold water" disbursement is displayed.

So I will keep it in simple terms so all who read this can understand. The first problem is the videos, I could make a video and show how I believe the cold water will mix and travel but after watching your video it just reinforces my belief in what AGL are trying to do by baffling people with false figures diagrams and videos.

I did a small research last week so you can have some basic practical data to play with.

your figure is 1.9m for the higher tides and 0.7 for the lower tides

This occurs twice a month for the faster tides, now lets look at the slower tides which is when the super chilled water will occur.

Now using your figures you say the tidal flow is .6 metres per second meaning it will only travel 1296 metres {please all those boat people stop laughing }, and this is where practical testing wins all the time.

I placed a bouy that was sitting 50% in and 50% out of the water near the jetty at the bottom of the tide, that was to stop any wind influence and I drifted with my vessel on a very calm day with the wind blowing at 2 knots from the west, that means as it passed the entrance to Hasting channel it would be slightly affected but once near Esso the wind would have no factor.

So testing with my GPS speed on my boat I drifted with this bouy and for 2 hours {the 3rd an and 4th hour the speed was 3.3 knots.

What does this mean ? It means anything in the water in the tidal flow will travel 6.6 nautical miles {11.88 klm} in 2 hours, which is a little bit further than the 1296 mts you claim, yet we still have another 4 hours of an incoming tide. So for people that do not understand how a tide flow works we use the twelfths rule. Using imperial figures, a 12 foot tide will rise in these increments:

so the 3rd and 4th hours are the fastest which is what I used for my test.

Your 200m is looking a bit sick at the moment, when the tide will carry the cold water with chlorine much more than 200m and more than likely about 18 to 20 klm.

NOW THIS IS ABSOLUTELY HILARIOUS {iF ANYONE HAS PROBLEMS WITH THEIR STOMACH MUSCLES PLEASE DO NOT READ ANY MORE, JUST A HEALTH HAZARD WARNING} AND IF THIS IS THE SORT OF RUBBISH YOU WANT US TO BELIEVE THEN YOUR WHOLE CREDIBILITY HAS GONE. 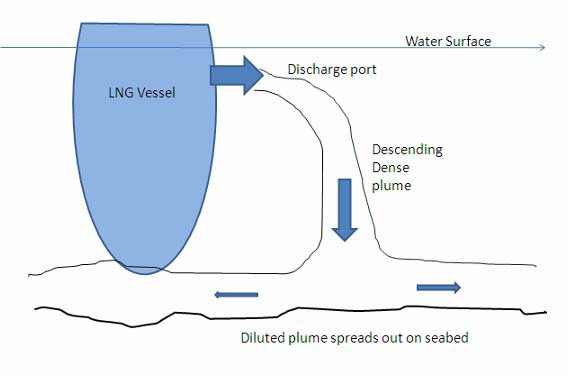 I look at the diagram and see that you say the water travels in a downward direction, maybe when there is no tidal influence and the water being pumped out is pumped downwards yet in your diagrame it travels outward at speed and your diagram assumes that it sinks to the bottom, not likely. So I assume you drew it incorrectly and the pump direction is downward and directed at the seabed causing a lot of turbulence and with a high chlorine content {before it mixes and dilutes}probably killing any living thing. I would assume that as the tide flows north or south the water is now being mixed into the flowing water before it reaches the seabed, and not directly downward. On a slow tide this sea water you are pumping back into Westernport has had several hours of being chilled as it has virtually been at a stand still and the pumps are pumping it in and out, the other factor is when the water id still the dilution of chlorine is a much lower ratio and becomes concentrated, so now the journey of this super chilled chlorinated water begins, moving as a massive block north or south and any water behind this large mass of super chilled water is still being cooled.

What I don't see is where the inlet is or the volume of water being drawn in and pumped out and at what depth, so I would have to assume it is mid water and like any suction the water will be drawn into the inlet over a vast area around the ship and pumped out at the same volume and speed, which I am sure will create massive turbulence all around the ship and most likely causing the sea water to mix and be chilled more than once and at the same time be saturated with chlorine.

You wrote this and this is where I dispute what you say.

There is no chance that cooler water will accumulate in the Marine Park or at Flinders.   There are two reasons for this statement Mixing in tidal currents will reduce the temperature in the ever-expanding patch to such a small difference that it cannot be detected (and certainly the patch cannot hang on as cold water in a dynamic environment with strong currents and mixing); My Response: at the bottom or top of the tide the water slows down, it does not flow and stop it has a gradual slowing down and on some tides it will almost be at a stand still 2 hours before the change, so what that means is the water is super chilled and will be a lot less temperature than you have stated because the water is chilled and chilled again many times. It will be chilled more than you say because of the turbulence of the pumps drawing water in and out of the pumps. You say it will never reach Flinders or the Marine park, true if the water mixes as it travels north and south but in fact it dosen't. It will travel in a very large plume travelling at the same speed as all the other water, it may be influenced by wind, reefs ect but not to the extent it will be stopped from getting to a Marine park or reaching Flinders, and this plume will have more concentration of Chlorine because of that fact it will not mix to the extent you say.

I get an email saying:

A reply to a topic you are following has been marked as solved!

I don't think so. Please answer my previous reply.

We apologise for the confusion. Marking the topic as 'solved' wasn't intended as a suggestion that your concerns have been addressed. It was done to promote it to the top of the discussion forum so that more people can see it. You'll see when you first login to the forum that this topic is one of the first that appears on the page.

We understand this may seem misleading, it’s a technological constraint we have with our forum system and we are looking into ways that might help us promote this particular discussion topic without implying that we have actually resolved the concern.

We can un-mark it as solved if you like?

I think AGL marking RobH1 posts as "solved" is very misleading as I thought RobH1 himself had marked it as solved and that his questions and issues had been  answered and resolved- which they clearly have not been!!

Could AGL please un-mark this topic as "solved"?

This topic is obviously not resolved.

We have removed the ‘solved’ mark from this topic.

We are open to continuing dialogue on key areas of concern, including those that RobH1 has raised and appreciate your engagement here.