AGL you have stated that the impact of the discharge from the FSRU reaching the seabed will likely cause scour.  You stated this will occur because the discharged water will descend to the seabed with sufficient momentum to form a local depression in the seabed. Your downward velocity calculations of 0.22m/s ( Or 792 Meters per hour) were provided.

As the seabed is comprised of fine sands and silts and the rate at which the seabed will be bombarded by the huge volumes of discharge hour after hour, vast amounts of sediment will be displaced/suspended and violently mixed into the flow of seawater.

As suspended sediment negatively impacts aquatic life, prevents light reaching submerged vegetation, clogs fish gills, and the deposition of sediment can bury habitats and physically alter a waterway or channel, could you please provide a detailed model/assessment of the impacts generated by the discharge of the FSRU in regards to- sediment density, sediment suspension, bedded sediment, sediment transport  and predicted sediment deposit location/s.

Sorry for the delay. We have sent this to one of the specialists.

We will update you as soon as we have received a response.

Where water discharged from the FSRU reaches the seabed with a velocity exceeding 0.2 m/s (0.22 m/s is the predicted velocity) we expect fine sands will be lifted into suspension.  Larger sand particles and cohesive mud will not be eroded at this velocity.  The outcome will be a shallow hole in the seabed adjacent to the vessel.

The hole will form in the first few days of operation and remain the same thereafter – that is, there will be initial local erosion and then the equilibrium bed shape will develop and there will not be further erosion.   The displacement of “vast amounts of sediment” will not occur.

In addition, the FRSU would be moored at Crib Point Jetty, in an area that is already dredged periodically by the Victorian Regional Channels Authority to maintain the channel and mooring depth for ships.   Thus natural processes are generally transporting sediment to the seabed within the port area.   When the FRSU is not used for a period, the hole in the seabed will refill over a period of weeks or months.

Another process to consider is that peak currents caused by the tides are 0.8 m/s (four times the jet velocity at the seabed) twice a day during spring tide conditions.   Thus the seabed in Western Port is predominantly shaped by the tidal currents and, around the perimeter, by wave-induced currents.  The influence of the discharge jets is small relative to tidal currents and localized to a small area at Crib Point in comparison to the major natural forces moving sediment throughout the Bay. 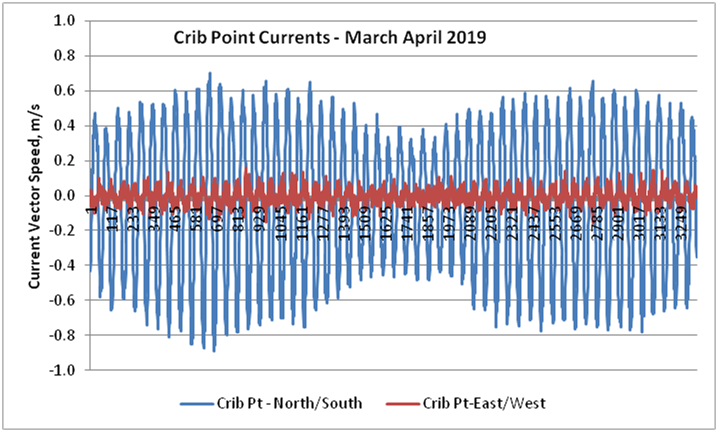